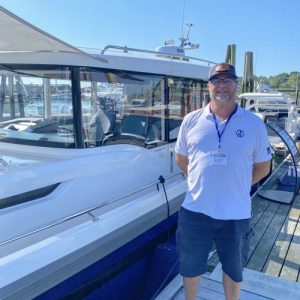 As a boy on a dairy farm in Warren, Rhode Island, Bob Chace never imagined he would grow up to be a yacht broker. Bob’s passion for the ocean began during his first career in the U.S. Navy. Having crossed the Equator many times as a Golden Shellback and seeeing the world, Bob came to realize that the sea was going to be part of his calling.

When his stint in the Navy came to an end, Bob entered his second career in banking where he helped many people realize their dream of buying a home. This passion for helping others along with his passion for the sea resulted in Bob’s third career as a successful yacht broker at Cape Yachts before joining Yachting Solutions as Sales Director.

When he’s not matching the right customer to the right boat boat, Bob spends his time with his wife and children on the waterfront. If you’re lucky, you might even catch Bob playing his guitar down at the YS Boat Basin on a Thirsty Thursday evening event.